The Journey to Josie & The Podcast

In early middle school, the number one item on my birthday wishlist was a Talkboy. If I have already lost you based upon our age differences, the Talkboy “toy” was a byproduct of the movie Home Alone 2: Lost in New York. The main character Kevin used a recording device throughout the film that documented his adventures and even deterred the “bad guys” trying to get him. 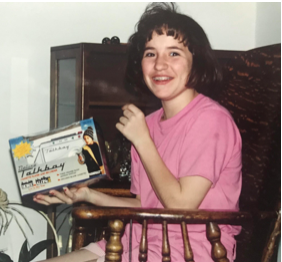 My Talkboy was my first entry into podcasting, recording my ramblings, singing and favorite music that happened to be playing on the radio. I would re-listen to my recordings, already getting used to the sound of my own voice.

Fast forward a few decades to Josie & The Podcast – a labor of love with tech bells and digital whistles far beyond what a Talkboy could handle. I was dreaming about a podcast for over a year, even going so far as owning a blue yeti microphone that sat in a box for months and months until I finally carved out the time to just do it already.

As a blogger and published author, I was ready to get into a different form of content creation. But I had no idea just how much I had to learn about podcasting, in addition to the amount of time it would take. While many podcasts are a fairly straightforward record and publish format, I, of course, was not so easy on myself. I choose to take on a podcasting format and editing expectations, which has resulted in fewer episodes but hopefully a higher quality of listening and learning experience.

The aim of Josie and the Podcast is to connect technology and leadership, specifically for higher education. However, in addition to featuring educational leaders – I ensure my line-up of interview guests include professionals in other industries such as nonprofit, new media and even college students.

Some of my favorite episodes over the last two years include:

In case you haven’t checked my lil show out, we kick off every episode reflecting back on how technology has been part of my guests past – even from childhood. I also bring up interesting (and entertaining) knowledge that I was able to dig up on my guest from searches on Google, YouTube, and various social media sites.

Why put my guests on the spot by digging into their digital history? Because it opens up the dialogue about how and why they approach social today. At the surface level, we answer the question of how they thrive with technology, especially in a leadership capacity. But much deeper we dialogue about their values, the meaning they make using tech and even the struggles or concerns they have with how our society approaches social.

I stand behind every guest I feature on the show, documenting their journies to serve as a digital role model for higher education to follow. And something I didn’t expect when creating the podcast was just how much I have grown as the show host. Sure I have more editing and interview skills, but I have been moved in our conversations that go far beyond what social media platforms they are on – such as dialogue about social justice, identity, and meaning-making.

The final element of podcasting that has brought joy into my life, is the community behind podcasting. This is why when I was contacted about joining this very network, a podcast network just for higher education podcasts, it was a very easy decision.

I can’t wait for the podcasting community to grow in higher ed, and to support new and existing podcasters who serve in a variety of roles in education. If you’d like to learn more about how I created my show, including the tools and tactics – head to a piece I wrote about it here.

Catch me podcasting on all your favorite podcasting platforms including iTunes, Stitcher, Google Play & Spotify!

Signing off just like every podcast episode, with digital hugs, loves and waves